The American composer Irving Berlin produced over eight hundred songs, many of which attained worldwide popularity. His patriotic songs, especially "God Bless America," summed up the feelings of Americans at the time.

Irving Berlin was born Israel Baline in Temun, Russia, on May 11, 1888. He was the youngest of Moses and Leah Lipkin Baline's eight children. His father, a cantor (a singer in a Jewish place of worship) who gave him singing lessons, was the first to expose Israel to music. The family fled the persecutions (the act of tormenting and harassing regularly) of Jews in Russia in 1893 and settled in New York City. The first years in America were very difficult—at one time every member of the family sold newspapers on the streets. Things got worse when Moses Baline died in 1896. At age fourteen Israel left home and began making money by singing in bars and on the streets of New York. He attended school for two years but had no formal musical education; he never learned to read or write music.

In 1906 Baline went to work as a singing waiter at a restaurant in New York's Chinatown. He waited tables and entertained customers by singing popular songs of the time with his own made-up lyrics. It was while working here that he wrote his first song, "Marie from Sunny Italy," which he worked on together with another restaurant employee. He also changed his name, becoming I. Berlin, lyricist (songwriter). This was the name he chose to appear on the 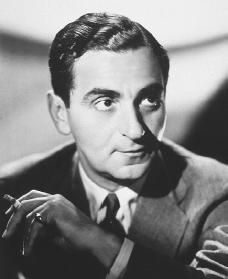 Irving Berlin.
Reproduced by permission of
Archive Photos, Inc.
sheet music when the song was published shortly after in 1907.

Berlin began to gain recognition as a clever lyric writer. He provided words for "Queenie, My Own," "Dorando," and "Sadie Salome, Go Home." The last was something of a success, and he was hired by a publisher to write words for new songs. Although he had difficulty writing English and had to have someone who understood musical notation (characters and symbols) write down the melodies that he created with one finger, within a year Berlin was established as a rising talent in the popular-music business.

Around this time music publishers became interested in ragtime, the highly original creation of African American musicians in the South and Midwest during the 1880s and 1890s. Berlin contributed lyrics—and a few tunes—to several mild ragtime songs. In 1911 he wrote the words and music for "Alexander's Ragtime Band," which started toward worldwide popularity when sung by Emma Carus in Chicago, Illinois, that year. It is one of the most famous of all "rag-time" songs, with its sheet music having sold over one million copies.

Berlin's fame continued to grow. He wrote his first complete musical score in 1914, Watch Your Step, followed by Stop, Look, Listen. In the Army during World War I (1914–18) he wrote a successful soldier show entitled Yip, Yip, Yaphank (1919), which contained "Oh, How I Hate to Get Up in the Morning." In 1919 he founded his own music publishing company, Irving Berlin, Inc.

Berlin's hundredth birthday was celebrated in a televised special from Carnegie Hall. When he died in New York on September 22, 1989, he was remembered as a symbol of the nation. As fellow songwriter Jerome Kern was quoted in Alexander Woollcott's biography of Berlin: "Irving Berlin has no place in American Music. He is American Music."