American teacher and scholar William Bennett was chairman of the National Endowment for the Humanities (1981–85), secretary of the Department of Education (1985–88), and director of the Office of National Drug Control Policy (1989–90). He continues his efforts to improve education and fight drugs, and he is an active voice for traditional values.

William John Bennett was born into a middle-class Roman Catholic family in Flatbush (Brooklyn), New York, on July 3, 1943. Describing himself as "streetwise," he first attended a public school but later transferred to Jesuit-run Holy Cross Boy's School. His family moved to Washington, D.C., where he graduated from Gonzaga High School, another Catholic institution. Bennett was mostly raised by his mother, but he also looked up to male American heroes such as actors, athletes, or presidents. He began to believe that, in addition to adult encouragement, heroes were necessary for a child's moral development. His high school football coach was also a role model of toughness, and he convinced Bennett of the value of sports.

Bennett went to Williams College to play football. He was a lineman who earned the nickname "the ram" from an incident where he butted down a female student's door. He worked his way through college (and later graduate school) with scholarships, loans, and part-time and summer jobs. Graduating in 1965, he studied philosophy (the search for an understanding of the world and man's place in it) at the University of Texas, where he earned a doctorate in 1970. He did not study all the time. In 1967 he went on a blind date with singer Janis Joplin, and he also played guitar with a band called Plato and the Guardians. Bennett also taught philosophy and religion at the University of Southern Mississippi for a year. After earning a law degree at Harvard University in 1971, he held several teaching and administrative posts at Boston University from 1971 to 1976.

Bennett gained national attention through his involvement with the National Endowment for the Humanities (NEH) and the National Humanities Faculty, a conservative group whose members believe in maintaining traditional values and institutions as they are. He also wrote articles on various topics. In May 1976 he became executive director of the National Humanities Center, which he had cofounded with Charles Frankel, a philosophy professor from Columbia University, who took the office of president. In 1979 Bennett coauthored Counting by Race: Equality from the Founding Fathers to Bakke and Weber with the journalist Terry Eastland. The book attacked affirmative action (a series of programs designed to give special consideration in hiring and education to members of groups who have been discriminated against in the past).

As a registered Democrat, Bennett described himself as open-minded about conservative causes. He worked on the Heritage Fund's Mandate for Leadership (1980), a series of recommendations for President-elect Ronald Reagan (1911–). When Bennett became a Republican, Reagan rewarded him by appointing him head of NEH in December 1981. As director, Bennett caused much controversy (dispute over opposing views). He agreed with Reagan's budget cuts for the agency and criticized projects made with NEH funds. With the release of a 1984 report titled To Reclaim a Legacy: A Report on the Humanities in Higher Education, Bennett stated that his major goal was to teach students the core of Western values. This earned him the scorn of women's and civil rights groups, as did his refusal to comply with affirmative action programs at NEH. In November 1984 the office of secretary of the Department of Education became open, and Reagan decided to appoint Bennett.

Bennett caused more controversy as the secretary of the Department of Education than he had at NEH. In his first press conference 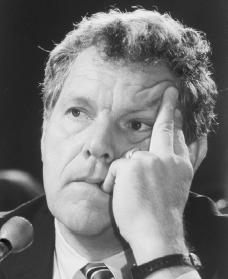 William Bennett.
Reproduced by permission of
Archive Photos, Inc.
he supported Reagan's student loan program cuts, saying that some individuals should not go to college. He attacked the educational establishment; said some colleges and universities were overpriced; expressed outrage that student loans were not being repaid; and criticized Stanford University's revised course schedule, which he felt placed less importance on Western civilization in favor of a larger study of world cultures. He remained in the public eye with appearances as a substitute teacher in a number of city schools and with many speeches and articles. He also published more books on education, including First Lessons: A Report on Elementary Education (1987), which lists his personal beliefs concerning elementary education. Bennett's focus in education was on the three C's: content, character, and choice.

Bennett resigned from the Department of Education in September 1988 to join a Washington law firm. He had married Mary Elayne Glover late in life (1982) and needed the extra income to support his two sons. The pull of public service proved too great, however. In January 1989 President George Bush (1924–) appointed him head of the Office of National Drug Control Policy with the mission to rid the nation of drugs. Bennett himself was a longtime smoker. He successfully kicked the habit in order to set an example. He pushed for more severe penalties for drug dealers, even suggesting that guilty parties should be beheaded as was done in Saudi Arabia. He urged the use of American military forces in Colombia and Peru to destroy drug supplies, and set a goal of making Washington a drug-free city. Bennett resigned in November 1990 to devote his time to public speaking and journalism.

In 1993 Bennett published The Book of Virtues, a collection of stories, poems, and fables intended to teach values to children. The book sold very well and led him to publish similar books, including The Moral Compass: Stories for a Life's Journey (1995). Conservatives in the Republican Party mentioned Bennett as a possible presidential candidate in 1994, but he did not run. Instead, he continued to speak out on issues, such as opposing some popular music and television talk shows that found their way into the 1996 presidential campaign. He was also popular as a public speaker and served as codirector of Empower America, an organization dedicated to the promotion of conservative ideas.

Bennett continues to work in education as chairman of K12, an Internet-based school. He continues his antidrug work as cochairman of the Partnership for a Drug-Free America with former New York Governor Mario Cuomo. And he continues to speak out about American values and morals. In 1998 he and Senator Joseph Lieberman presented the first "Silver Sewer" Award to Seagram, Inc., for its involvement in the production of offensive television shows and music. In 2002 Bennett published Why We Fight: Moral Clarity and the War on Terrorism.

Just a small correction, but Holy Cross Boys School was operated by the Xaverian Brothers, not the Jesuits. The Jesuit reference seems to be repeated in many articles, but it is incorrect. Although I don't recall knowing Bill Bennett, I attended Holy Cross at the same time, graduating the year after Bill.
2
Carole pennington

And what they are doing and how many grandchildren Bennett has
And is he still married, what is he doing now