The work of Simone de Beauvoir, a French writer, became the basis of the modern women's movement. Her writing dealt with the struggles of women in a male-controlled world.

The first of two daughters of Georges and Francoise de Beauvoir, a middle-class couple, Simone de Beauvoir was born in Paris, France, on January 9, 1908. Her father was a lawyer and had no religious beliefs; her mother was a strong believer in Catholicism. Simone was educated at a strict Catholic school for girls. After World War I (1914–18), her father suffered money problems, and the family moved to a smaller home. Beauvoir entered the Sorbonne and began to take courses in philosophy (the search for an understanding of the world and man's place in it) to become a teacher. By this time she no longer believed all she had been taught in Catholic school. She also began keeping a journal—which became a lifetime habit—and writing some stories.

When Beauvoir was twenty-one she joined a group of philosophy students including Jean-Paul Sartre (1905–1980). Her relationship with Sartre was to continue throughout most of their lives. Sartre was the father of existentialism—a belief that man is on his own, "condemned to be free," as Sartre said in Being and Nothingness. He was also the single most important influence on Beauvoir's life. In 1929 he suggested that, rather than be married, the two sign a contract that could be renewed or cancelled after two years. When the agreement ended, Sartre was offered a job teaching philosophy in Le Havre, France, and Beauvoir was offered a similar job in Marseilles, France. He suggested 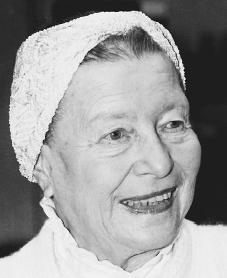 Simone de Beauvoir.
Reproduced by permission of
AP/Wide World Photos
.
they get married, but after some thought they both rejected the idea.

The first installment of Beauvoir's autobiography (the story of her life), Memoirs of a Dutiful Daughter, describes her rejection of her parents' middle-class lives. The second volume, The Prime of Life, covers the years 1929 through 1944, a time when she and Sartre were both teaching in Paris and she was, she said, too happy to write. That happiness ended with the beginning of World War II (1939–45) and problems in her relationship with Sartre, who became involved with another woman and was also imprisoned for more than a year. During this unhappy time Beauvoir composed her first major novel, She Came to Stay (1943), a study of the effects of love and jealousy. In the next four years she published The Blood of Others, Pyrrhus et Cinéas, Les Bouches Inutiles, and All Men are Mortal. America Day By Day, a chronicle of Beauvoir's 1947 trip to the United States, and the third part of her autobiography, Force of Circumstances, cover the period during which the author was writing The Second Sex .

Written in 1949, The Second Sex had two main ideas: that man, who views himself as the essential being, has made woman into the inessential being, "the Other," and that femininity as a trait is an artificial posture. Sartre influenced both of these ideas. The Second Sex was perhaps the most important writing on women's rights through the 1980s. When it first appeared, however, it was not very popular. The Second Sex does not offer any real solutions to the problems of women except the hope "that men and women rise above their natural differentiation (differences) and unequivocally (firmly) affirm their brotherhood." The description of Beauvoir's own life revealed the possibilities available to the woman who found ways to escape her situation. Hers was a life of equality, and she remained a voice and a model for those women not living free lives.

The fourth installment of her autobiography, All Said And Done, was written when Beauvoir was sixty-three. In it she describes herself as a person who has always been secure in an imperfect world: "Since I was 21, I have never been lonely. The opportunities granted to me at the beginning helped me not only to lead a happy life but to be happy in the life I led. I have been aware of my shortcomings and my limits, but I have made the best of them. When I was tormented by what was happening in the world, it was the world I wanted to change, not my place in it." On April 14, 1986, Simone de Beauvoir died in a Paris hospital. Sartre had died six years earlier.