The American surgeon William Beaumont is remembered for extensive studies of the human digestive system based on the experiments of a live patient.

William Beaumont was born in Lebanon, Connecticut, on November 21, 1785. He grew up on the family farm and attended village schools until 1806, when he left home to become the village schoolmaster in Champlain, New York. He began studying medicine in his spare time, and in 1810 he became an apprentice (one who works for another to learn a profession) to a doctor in Vermont. While living with the doctor and performing household duties, Beaumont gained invaluable experience by watching and sometimes assisting the doctor. While still a student, he began a lifelong habit of keeping a journal describing daily events and the symptoms and treatment of patients.

In 1812 the Third Medical Society of the State of Vermont recommended Beaumont as a medical practitioner. Soon afterward Beaumont served as a surgeon's mate in the War of 1812, where American forces clashed with the British over, among other things, trade. In his journal he described long and exhausting days and nights spent treating the wounded.

After the war Beaumont returned to private practice in Plattsburg, New York. In 1820 he reenlisted as an army surgeon and was sent to Fort Mackinac in the Michigan Territory. His account of the journey contains 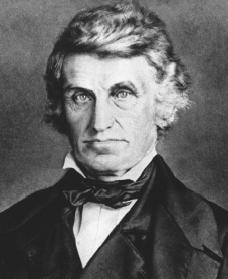 William Beaumont.
Reproduced by permission of the
Corbis Corporation
.
vivid descriptions of the voyage along the recently completed Erie Canal (a key waterway that connects the Great Lakes) and through the Canadian wilderness. He was the only doctor in the territory, and his practice included soldiers and their families, Native Americans, trappers, and settlers. In 1821 Beaumont returned briefly to Plattsburgh and married Deborah Platt.

On June 6, 1822 Alexis St. Martin, a young Canadian, suffered a stomach wound in a hunting accident. Beaumont was called to treat him. He described the terrible wound: "The whole charge, consisting of powder and duck shot, was received in the left side at not more than two or three feet distance from the muzzle of the piece … carrying away by its force integuments [skin of the organs] more than the size of the palm of a man's hand."

With Beaumont's skillful surgery and care that followed, St. Martin recovered but was left with a permanent opening in his stomach. When authorities threatened to send the recovering man back to Canada, Beaumont supported him in his own house for several years. During this time he was able to study the digestive process by examining the interior of the patient's stomach as various foods were ingested (swallowed). Beaumont's observations and chemical analyses of gastric juices (acidic juices found in the stomach) provided the foundations for conclusions which are still used today.

In 1824 when Beaumont was transferred to Fort Niagara, New York, he attempted to take St. Martin with him, but the young man returned to Canada. President John Quincy Adams (1767–1848) promoted Beaumont to the rank of surgeon in 1826. He served at Green Bay, Wisconsin, and later at Fort Crawford, Wisconsin. Meanwhile, he had finally persuaded St. Martin to come to Fort Crawford for further experiments, but his plans to take his patient to Europe for demonstrations and study were interrupted by an outbreak of cholera, an oftentimes fatal infection transmitted through water.

Later in 1832 Beaumont used a six-month leave of absence to take St. Martin to Washington, D.C., for an extensive series of experiments. Both the surgeon general and the secretary of war supported the project with funds and facilities, and they even enlisted St. Martin in the army as sergeant in exchange for his cooperation. These experiments led to Beaumont's Experiments and Observations on the Gastric Juice and the Physiology of Digestion (1833). The book is divided into two parts, one which details the experiments themselves, and another that discusses the processes of digestion.

Beaumont had additional experiments in mind, but St. Martin returned to Canada forever in 1834. Beaumont's last post was in St. Louis, Missouri, where he remained for the rest of his life. After his retirement in 1840, he continued private practice until his death on April 25, 1853.

Epstein, Sam, and Beryl Epstein. Dr. Beaumont and the Man with the Hole in His Stomach. New York: Coward, McCann & Geoghegan, 1978.

this website was very good and gave me lots of info yay!!!!