Count Basie was an extremely popular figure in the jazz world for half a century. He was a fine pianist and leader of one of the greatest jazz bands in history.

William Basie was born in Red Bank, New Jersey, on August 21, 1904. His parents, Harvey and Lillian (Childs) Basie, were both musicians. Basie played drums in his school band and took some piano lessons from his 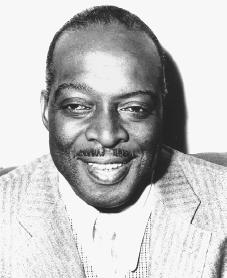 Count Basie.
Reproduced by permission of
AP/Wide World Photos
.
mother. But it was in Harlem, New York City, that he learned the basics of piano, mainly from his sometime organ teacher, the great Fats Waller (1904–1943).

Basie made his professional debut playing piano with vaudeville acts (traveling variety entertainment). While on one tour he became stranded in Kansas City, Missouri. After working briefly as house organist in a silent movie theater, he joined Walter Page's Blue Devils in 1928. When that band broke up in 1929, he Bennie Moten's band hired him. He played piano with them, with one interruption, for the next five years. It was during this time that he was given the nickname "Count."

After Moten died in 1935, Basie took what was left of the band, expanded the personnel, and formed the first Count Basie Orchestra. Within a year the band developed its own variation of the Kansas City swing style—a solid rhythm backing the horn soloists, who were also supported by sectional riffing (the repeating of a musical figure by the non-soloing brass and reeds). This familiar pattern was evident in the band's theme song, "One O'Clock Jump," written by Basie himself in 1937.

Success in the swing era

By 1937 Basie's band was, with the possible exception of Duke Ellington's (1899–1974), the most famous African American band in America. Basie's band regularly worked some of the better big city hotel ballrooms. With many of the other big bands of the swing era he also shared the less appealing one-nighters (a series of single night performances in a number of small cities and towns that were traveled to by bus).

Many of the band's arrangements were "heads"—arrangements worked out without planning in rehearsal and then written down later. The songs were often designed to showcase the band's brilliant soloists. Sometimes the arrangement was the reworking of a standard tune—"I Got Rhythm," "Dinah," or "Lady, Be Good." Sometimes a member of the band would come up with an original, written with a particular soloist or two in mind. Two of Basie's earliest favorites, "Jumpin' at the Woodside" and "Lester Leaps In," were created as features for saxophonist Lester Young. They were referred to as "flagwavers," fast-paced tunes designed to excite the audience. The swing era band (1935–45) was unquestionably Basie's greatest. The superior arrangements (reflecting Basie's good taste) and the skilled performers (reflecting Basie's sound management) gave the band a permanent place in jazz history.

The loss of key personnel (some to military service), the wartime ban on recordings, the 1943 musicians' strike, the strain of onenighters, and the bebop revolution of the mid-1940s all played a role in the death of the big-band era. Basie decided to form a medium-sized band in 1950, juggling combinations of all-star musicians. The groups' recordings were of the highest quality, but in 1951 Basie returned to his first love—the big band—and it thrived. Another boost was provided in the late 1950s by the recording of "April in Paris," which became the trademark of the band for the next quarter of a century.

A stocky, handsome man with heavy-lidded eyes and a sly smile, Basie was a shrewd judge of talent and character, and he was extremely patient in dealing with the egos of his musicians. He and his band recorded with many other famous artists, including Duke Ellington (1899–1974), Frank Sinatra (1915–1998), Ella Fitzgerald (1917–1996), and Sarah Vaughan (1924–1990). Perhaps the most startling of the band's achievements was its fifty-year survival in a culture that experienced so many changes in musical fashion, especially after the mid-1960s, when jazz lost much of its audience to other forms of music.

In 1976 Basie suffered a heart attack, but he returned to the bandstand half a year later. During his last years he had difficulty walking and so rode out on stage in a motorized wheelchair. He died of cancer in Hollywood, Florida, on April 26, 1984. His wife, Catherine, had died in 1983. They had one daughter. The band survived Basie's death, with trumpeter Thad Jones directing until his own death in 1986.

I saw Count Basie himself perform in Melbourne Australia not long before he died, perhaps by a couple of years, can you please help me with a date of this tour, thanks.
2
Tony Razzano

One Great Band.Count Basie will always be remembered..Too bad he passed away..