One of Canada's best-known writers, Margaret Atwood is an internationally famous novelist, poet, and critic. She is also committed to positive change in our way of life.

Margaret Eleanor Atwood was born in Ottawa, Ontario, Canada, in 1939. She moved with her family to Sault Ste. Marie, Canada, in 1945 and to Toronto, Canada, in 1946. Until she was eleven she spent half of each year in the northern Ontario wilderness, where her father worked as an entomologist (insect scientist). Her writing was one of the many things she enjoyed in her "bush" time, away from school. At age six she was writing morality plays, poems, comic books, and had started a novel. School and preadolescence brought her a taste for home economics. Her writing resurfaced in high school, though, where she returned to writing poetry. Her favorite writer as a teen was Edgar Allan Poe (1809–1849), who was famous for his dark mystery stories.

Atwood was sixteen years old when she made her commitment to pursue writing as a lifetime career. She studied at Victoria College, University of Toronto, where she received a bachelor's degree in 1961. Then she went on to complete her master's degree at Radcliffe College in Cambridge, Massachusetts, in 1962. Atwood also studied at Harvard University in Cambridge, Massachusetts, from 1962 to 1963 and from 1965 to 1967.

Atwood has received more than fifty-five awards, including two Governor General's Awards, the first in 1966 for The Circle Game, her first major book of poems; the second for her 1985 novel, The Handmaid's Tale, which was made into a movie. In 1981 she worked on a television drama, Snowbird, 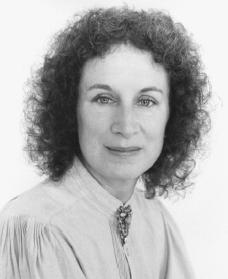 Margaret Atwood.
Reproduced by permission of
Mr. Jerry Bauer
.
and had her children's book Anna's Pet (1980) adapted for stage (1986). Her recognition is often reflective of the wide range of her work. She is also a major public figure and cultural commentator.

Most of Atwood's fiction has been translated into several foreign languages. A new Atwood novel becomes a Canadian, American, and international bestseller immediately. There is a Margaret Atwood Society, a Margaret Atwood Newsletter, and an ever-increasing number of scholars studying and teaching her work in women's studies courses and in North American literature courses worldwide.

Atwood has alternated prose (writing that differs from poetry due to lack of rhyme and closeness to everyday speech) and poetry throughout her career, often publishing a book of each in the same or consecutive years. While in a general sense the poems represent "private" myth and "personal" expression and the novels represent a more public and "social" expression, there is, as these dates suggest, continual interweaving and cross-connection between her prose and her poetry. The short story collections, Dancing Girls (1977), Bluebeard's Egg (1983), and especially the short stories in the remarkable collection Murder in the Dark (1983) bridge the gap between her poetry and her prose.

Atwood writes in an exact, vivid, and witty, style in both prose and poetry. Her writing is often unsparing in its gaze at pain and unfairness: "you fit into me / like a hook into an eye / a fish hook / an open eye" (from Power Politics ) "Nature" in her poems is a haunted, clearly Canadian wilderness in which, dangerously, man is the major predator of and terror to the "animals of that country," including himself.

Atwood's novels are sarcastic jabs at society as well as identity quests. Her typical heroine is a modern urban woman, often a writer or artist, always with some social-professional commitment. The heroine fights for self and survival in a society where men are the all-too-friendly enemy, but where women are often participants in their own entrapment.

Atwood is also a talented photographer and watercolorist. Her paintings are clearly descriptive of her prose and poetry and she did, on occasion, design her own book covers. Her collages and cover for The Journals of Susanna Moodie bring together the visual and the written word.

Atwood is known as a very accessible writer. One of her projects, the official Margaret Atwood Website, is edited by Atwood herself and updated frequently. The Internet resource is an extensive, comprehensive guide to the literary life of the author. It also reveals a peek into Atwood's personality with the links to her favorite charities, such as the Artists Against Racism site, or humorous blurbs she posts when the whim hits. As well, the site provides dates of lectures and appearances, updates of current writing projects, and reviews she has written. The address is: http://www.owtoad.com

Margaret Atwood's contribution to Canadian literature was most recently recognized in 2000, when she received Britain's highest literary award, the $47,000 Booker Prize. Atwood donated the prize money to environmental and literary causes. Her generosity is not at all a surprising development to her many fans.