Aman of the people and loved by many in his home country, Jean-Bertrand Aristide was first elected president of Haiti by a large margin in 1990. He was removed from power in a military takeover in 1991, however. Aristide lived abroad until 1994, then a U.S. military occupation of Haiti restored him to power. In 1995 his hand-picked successor was elected president. In 2000 Aristide won his second term.

Jean-Bertrand Aristide was born on July 15, 1953, in Port-Salut, a small town along Haiti's southern coast. When Aristide was just three months old, his father passed away. His mother, who wanted to provide Jean and his sister with a better life, moved the family to Port-au-Prince, Haiti. Jean studied under the priests of the Society of St. Francis de Sales (or the Salesian Order) of the Roman Catholic Church. The Salesian Order, with European and American houses and members, focused on the religious instruction of Haiti's poor and orphaned children. Aristide received his early education in their schools and later attended their seminary (an institute for training priests) in Haiti. In 1979 he earned a bachelor's degree in psychology at the State University of Haiti. He was later sent to Israel, Egypt, Britain, and Canada for biblical studies. He learned to read and speak 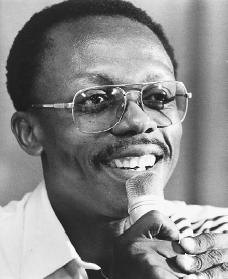 Jean-Bertrand Aristide.
Reproduced by permission of
AP/Wide World Photos
.
French, Spanish, English, Hebrew, Italian, German, and Portuguese in addition to his native Creole, which is spoken by 90 percent of Haitians.

Aristide became a priest in 1982. In 1988, however, he was expelled from the Salesian Order for preaching too politically and for what Aristide called his "fidelity [faithfulness] to the poor." The Vatican (the headquarters of the Roman Catholic Church) in Rome, Italy, and his local bishop had warned him to preach less radically, or less outside the mainstream, and to stop turning the members of his church against the Haitian state. From the time he became a priest, Aristide had condemned Haiti's lack of democracy. At the Church of St. Jean Bosco in the poorest part of Port-au-Prince he argued that only a religious and political cleansing could save the country.

For all but the first five years of Aristide's life, a harsh family dictatorship (a government in which power is controlled by one person or only a few people) led by François "Papa Doc" Duvalier (1907–1971) and his son, Jean-Paul "Baby Doc" Duvalier (1951–), had ruled Haiti. Human rights violations were common. Ordinary Haitians lived in fear of a violent group known as the "tonton macoutes," who terrorized the population. The ruling family and the state were one and the same, and the Duvaliers preyed viciously on the people. Corruption was everywhere.

Aristide's opposition to the dictatorship grew out of his religious beliefs and his feelings for the suffering Haitian people. He may have thought that the Duvalier dictatorship was crumbling. After months of popular protest, some of which was inspired by Aristide's preachings, Baby Doc fled from Haiti to France in early 1986.

The military groups that succeeded Baby Doc in power also oppressed the poor. Aristide criticized the reigns of both General Prosper Avril and Lieutenant General Henri Namphy. In revenge the tonton macoutes attacked the Church of St. Jean Bosco in revenge, killing thirteen members of Aristide's congregation in 1988. Two weeks later Aristide was expelled from the Salesian Order. The Roman Catholic Church ordered Aristide to Rome, but that resulted in one of the largest street demonstrations in Haitian history. Tens of thousands of Haitians angrily blocking Aristide's departure by air.

Aristide had not lost his power, despite his expulsion from the order. After 1988 he continued to work with Port-au-Prince's desperately poor. He ran a shelter for children living on the street and opened a medical clinic.

When the United Nations (UN), the United States, and the Organization of American States finally persuaded the military men of Haiti to hold elections, Aristide was not an expected candidate. The character of the race for the presidency changed dramatically, however, when Aristide decided to run only a few months before the election in December 1990. His pledge for justice for victims of dictatorship and violence struck a chord among the poor, nearly all of whom would be voting for the first time in the nation's first free election. He also spoke harshly against the United States, both as a supporter of the Duvaliers and as an exploiter of the world.

Aristide soundly defeated his competition for the presidency. He won 67 percent of the popular vote, but his Lavalas (Avalanche) Party, which had had little time to organize, took only a relatively small percentage of the seats in the Haitian parliament. Before military men led by General Raoul Cedras overthrew Aristide on September 30, 1991, the new president had alarmed the commercial and old-line ruling classes of Haiti. Aristide had preached violence against macoutes and had gone after people suspected of being secret Duvalierists. His constructive accomplishments in office had been few, not all that surprising given that his power in parliament was small.

Aristide lived first in Venezuela and later in the United States. Soon after he was removed from power, the United States, the Organization of American States, and the UN embargoed, or stopped, Haitian exports and attempted to cease shipping oil and other imports. But those efforts were only partially successful. The Haitian people suffered from these economic policies much more than the military leaders.

All three groups then attempted to bargain a settlement between Aristide and Cedras. Several agreements fell apart when Aristide changed his mind. Others failed because the military leaders were endlessly suspicious of Aristide's real intentions.

In mid-1993 the administration of President Bill Clinton (1946–) and the UN persuaded Aristide and Cedras to meet near New York. They were to make an agreement that would return Aristide to the Haitian presidency for the final twenty-seven months of his single, nonrenewable term, and to provide an amnesty, or group pardon, for the military. But powerful people in Haiti refused to put the agreement in place. President Clinton sent more than twenty-three thousand U.S. troops to Haiti. The task of this military mission was to ensure the safe and successful return of Aristide to power. The goal was accomplished, and Aristide completed his term. On December 17, 1995, a Haitian presidential election took place, and Rene Preval was elected to succeed Aristide.

In 2000 Aristide's Lavalas Family Party won control of Haiti's Senate. On November 26 of that same year Aristide became a candidate for Haiti's national election. He faced four small-time candidates. The main opposition parties said they would not participate in the election, claiming Aristide wanted to return Haiti to a dictatorship. Many of his opponents thought that the parliamentary elections had not been fair, especially when Aristide won the presidential election. In his inaugural address, or first speech as new president, Aristide pledged to investigate the Senate elections. He also pledged to improve Haiti by, among other things, building more schools and bettering its healthcare system.

After the 2000 elections many foreign countries refused to give hundreds of millions of dollars in aid to Haiti until the disputes that arose as a result of the elections were settled. In December 2001 Aristide once again became the target of a group attempting to overthrow his government. But this time the attackers were defeated and Aristide remained in power. In 2002 Aristide promised to work at improving the political situation in Haiti.

Aristide, Jean-Bertrand. In the Parish of the Poor. Edited by Amy Wilentz. Maryknoll, NY: Orbis Books, 1990.