As president of Uganda from 1971 to 1979, Idi Amin (c. 1925–) became well known for his terrible violations of human rights, for causing the collapse of the country's economy, and for causing social disorganization. Amin is remembered best as the tyrant of Uganda who was responsible for a reign filled with mass killings and disorder.

Idi Amin Dada was born sometime between 1925 and 1927 in Koboko, West Nile Province, in Uganda. His father was a Kakwa, a tribe that exists in Uganda, Zaire (now Congo), and Sudan. As a boy, Amin spent much time tending goats and working in the fields. He embraced Islam and attained a fourth-grade education. He was brought up by his mother, who abandoned his father to move to Lugazi, Uganda.

As Amin grew he matched the qualifications for military service desired by the British at that time. He was tall and strong. He spoke the Kiswahili language. He also lacked a good education, which implied that he would take orders well. Joining the army as a private in 1946, Amin impressed his superiors by being a good swimmer, rugby player, and boxer. He won the Uganda heavyweight boxing championship in 1951, a title he held for nine years. He was promoted to corporal in 1949.

During the 1950s Amin fought against the Mau Mau African freedom fighters, who were opposed to British rule in Kenya. Despite his cruel record during the uprisings, he was promoted to sergeant in 1951, lance corporal in 1953, and sergeant-major and platoon commander in 1958. By 1961 Amin had become one of the first two Ugandan officers with the rank of lieutenant.

In 1962 Amin helped stop cattle rustling, or stealing, between neighboring ethnic groups in Karamoja, Uganda, and Turkana, Kenya. Because of the brutal acts he committed during these operations, British officials recommended to Apolo Milton Obote (1924–), Uganda's prime minister, that he be brought to trial as a criminal. Obote instead publicly criticized him, deciding it would have been politically unwise to put on trial one of the two African officers just before Uganda was to gain independence from Britain on October 9, 1962. Thereafter Amin was promoted to captain in 1962 and major in 1963. He was selected to participate in the commanding officers' course at Wiltshire school of infantry in Britain in 1963. In 1964 he was made a colonel.

Amin's close association with Obote apparently began in 1965. Obote sympathized with the followers of the murdered prime minister of the Congo, Patrice Lumumba (1925–1961). Obote asked Amin for help in establishing military training camps. Amin also brought coffee, ivory, and gold into Uganda from the Congo so that the rebels there could have money to pay for arms. The opponents of Obote wanted an investigation into the illegal entry of gold and ivory into Uganda. Obote appointed a committee to look into the issue. He promoted Amin to chief of staff in 1966, and to brigadier and major-general in 1967.

By 1968 the relationship between Obote and Amin had gone sour. An attempted assassination of Obote in 1969, and Amin's suspicious behavior thereafter, further widened the gap between the two men. It is unclear why Obote promoted Amin in 1970 to become chief of general staff, a position that gave him access to every aspect of the armed forces. Amin overthrew Obote's government on January 25, 1971.

Ugandans joyfully welcomed Amin. He was a larger-than-life figure and yet simple enough to shake hands with common people and participate in their traditional dances. He was charming, informal, and flexible. Amin was thought to be a nationalist (a person who supports his or her country above all else). His popularity increased when he got rid of Obote's secret police, freed political prisoners, and told Ugandans that he would hand power back to the people.

During this period, Amin's other personality began to emerge: that of a merciless, unpredictable, cunning liar. His "killer squads" murdered Obote's supporters and two Americans who were investigating massacres (large-scale killings). It was becoming clear that Amin's seeming friendliness and clowning were only a mask to hide his brutality.

In 1972 he savagely attacked the Israelis and the British, with whom he had been friendly. He did not like that these countries would not sell him weapons. Once Mu'ammar al-Qaddafi (1942–) of Libya agreed to help, Amin immediately threw Israelis and fifty thousand Asians out of Uganda. Uganda's economy was wrecked because Asian traders were suddenly forced to leave. The action also earned Amin a poor international image.

Between 1972 and 1979 Amin's policy was to stay in power at any cost. Though he seemed brave, Amin was a coward. He was, for example, terrified in 1978 when a story circulated that a "talking tortoise" had predicted 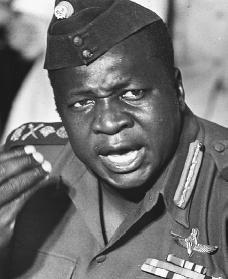 Idi Amin.
Reproduced by permission of
AP/Wide World Photos
.
his downfall. He constantly changed bodyguards, traveling schedules and vehicles, and sleeping places. He controlled the army through frequent reorganization. He also kept his army happy by giving them tape recorders, expensive cars, rapid promotions, and businesses that had been owned by Asian traders.

Trying to stay in power

Amin used violence and terror to eliminate his real and imaginary enemies. The human cost of Amin's rule was huge—not only in terms of the loss of thousands of Ugandans, but also because of its dehumanizing (making people feel less than human) effects. Human life had become less important than wealth.

Most government funds were devoted to the armed forces and to Amin's safety. Health, transport, production of food and cash crops (easily marketable crops), industrial and manufacturing sectors, and foreign investments were neglected. Despite his growing poor reputation, Amin was elected chairman of the Organization of African Unity (OAU), an organization of African nations, on July 28, 1975. In 1977 African countries blocked a United Nations resolution that would have condemned Amin for his gross violation of human rights.

By the late 1970s Amin's luck was running out. The economy was getting worse. Arabs were concerned about Amin's failure to show how Uganda was becoming an Islamic nation but also concerned about his killing of fellow Muslims. It was becoming difficult for Amin to import luxury goods for his army. To distract attention from the country's internal crises, Amin ordered an invasion of Tanzania in October 1978, supposedly because the latter planned to overthrow his government. Amin's army was forced back. Tanzanians and exiled Ugandan soldiers then invaded Uganda and continued their pursuit of Amin until his government was overthrown on April 11, 1979.

Amin fled to Libya, but he later moved to Jidda, Saudi Arabia. There he spends his time reciting the Koran (the holy book of Islam), reading books, playing an accordion, swimming, fishing, and watching television—especially sports programs and news channels. He follows events in his homeland closely.

Uganda was a troubled nation in the 1980s. Its African neighbors were plagued with starvation and genocide, but the Ugandan nation fell victim to an extreme totalitarian government. Idi Amin used milliary power to seize and hold political office; this led to corrupt and unstable rule and a helpless population. In this case, it was a powerless situation in which not even citizens themselves, outlaying African powers nor International powers could aid. Uganda was at the capricious whim of Idi Amin for eight years. During this time, an estimated 500,000 people were killed as a result of Aminâ€™s regime.
Captain Idi Amin rose to power through the military. He was awarded high honors as a chief general. His success merited the attention of Ugandan president Milton Obote in 1963. Although Amin was uneducated and illiterate, he was offered a role as the Deputy Commander of the Ugandan Army. After working in Oboteâ€™s offices to build Ugandaâ€™s military, Idi Amin mobilized choice loyal troops to lead a military coup and seize power from President Milton Oboe in 1971. Ironically, Aminâ€™s siege was successful because of the power granted to him by Obote himself.
Amin was initially welcomed into office by the people of Uganda because he promised suffrage and an instillation of civil rights. Ugandan people were probably attracted to this new idea because they had been previously ruled as a British colony and Milton Obote was accused of being a sort of dictator for abolishing a previous governmental constitution. The population was easily influenced by Idi Amin due to his sense of charisma.
Popular opinion soon changed when Amin began a regime of murder for all those who opposed him. Amin built up a body of well-trained spies to detect opposition while simultaneously tripling the size of the Ugandan armed forces. â€œAminâ€™s military experience, which was virtually his only experience, determined the character of his rule. He renamed the Government House â€œthe Command Postâ€ (parenthetical citation). It was when Amin began his totalarian regime that everyone began to realize the trouble that they were in. sadly enough, words equaled death by order of Amin; there was nothing that anyone could do to put down his rule. With the abolishment of civil rights and the establishment of a secret police force, citizens of Uganda were helpless. There were many attempts to put down the utalitarian rule. But, as substandard of a political leader Amin was, he was a fantasic commander and used his connections and influence to maintain a loyal and strong army. This band of secret police, (a group of spies comprised of hand-picked soldiers), lived undercover as common citizens in order to detect any opposition to the Amin regime. Much like Stalinâ€™s black list or the American McCarthy plan, any conspirator was killed or exiled.
It is crucial to look at the populance in this situation; any attempts to freedom that they hoped for were met with death or exilation. They knew that secret police were armed and ubiquitous. People had never before experienced any form of independence due to colonial rule and an installed president so they did not know how to respond to Aminâ€™s form of government. The United States of America, France, and Tanzania were among the first nations to condemn Aminâ€™s forceful reign but they chose not to intervene in the situation.
Amin continued his dictorial rule by suspending civil rights and dissolving the national assembly. He created the Public Safety Unit as a group Amin was quickly running out of money due to his lavish spending on weapons and bonuses in commander salary.
2
Maury Balkman

I read that Idi Amin had Neurosyphilis, and was reported to have eaten forty oranges in one day for "sex power".
3
charles

Indeed the late president was a brave man without self esteem and mind. Killing many innocent lives like my grandpa mr. Ofumbi makes him my worst person who ever lived on earth then
Ruthless, merciless, were Iddi Amin's characters whom no one can ever admire today. He would have been a better president without those ankward behaviour
I still mourn my late grandy ofumbi whom the so called president killed without a reason