The Greek playwright Aeschylus was the first European dramatist whose plays were preserved. He was also the earliest of the great Greek tragedians (writers of serious drama involving disastrous events), and was concerned with the common connection between man and the gods more than any of the other tragedians.

Aeschylus was born to a noble and wealthy Athenian family in the Greek town of Eleusis. His father was Euphorion, a wealthy man of the upper class. Aeschylus's education included the writings of Homer (Greek poet who lived during the 800s B.C.E. and wrote the Iliad and the Odyssey ). In fact it was Homer who proved most inspiring to Aeschylus when he began to write as a teen. He entered his tragedies into the annual competition in Athens and won his first award as a young adult in 484 B.C.E. Aeschylus' writings were strongly Athenian and rich with moral authority. He carried home the first place award from the Athens competition thirteen times!

As a young man Aeschylus lived through many exciting events in the history of Athens. Politically the city underwent many constitutional reforms resulting in a democracy. Aeschylus became a soldier and took part in turning back a Persian invasion at the Battle of Marathon (490 B.C.E. ). Nevertheless, Aeschylus's plays left a bigger mark in Greek history than any of his battle accomplishments.

Because Aeschylus was writing for the Greek theater in its beginning stages, he is credited with having introduced many features that are now considered traditional. Formerly plays were written for only one actor and a chorus. Aeschylus added parts for a second and a third actor as well as rich costumes and dance.

Corresponding with his grand style were his grand ideas. Mighty themes and mighty men crossed his stage. Aeschylus has been described as a great theologian (a specialist in the study of faith) because of his literary focus on the workings of the Greek gods.

Modern scholarship has shown that the first of Aeschylus's plays was The Persians. It is also the only play on a historical subject that has survived in Greek drama. This play is seen from a Persian point of view. His theme sought to show how a nation could suffer due to its pride. Of his ninety plays only seven are still preserved. 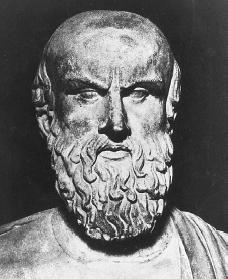 Prometheus Bound is perhaps Aeschylus' most well-known tragedy because of his depiction of the famous Prometheus, who is chained to a mountain peak and cannot move. He is being punished for defying the authority of the god Zeus by bringing fire to mankind. Zeus is depicted as a bully and Prometheus as a suffering but defiant rebel. Both are guilty of pride. Both must learn through suffering: Zeus to exercise power with mercy and justice, and Prometheus to respect authority.

Aeschylus' masterpiece is the Oresteia, the only preserved trilogy from Greek drama. The three plays are Agamemnon, The Choephori, and The Eumenides. Though they form separate dramas, they are united in their common theme of justice. King Agamemnon returns to his home after the Trojan War (490–480 B.C.E. ; a war in which the Greeks fought against the Trojans and which ended with the destruction of Troy) only to be murdered by his scheming wife, Clytemnestra, and her lover. The king's children seek revenge that ultimately leads to their trial by the gods. The theme of evil compounding evil is powerfully written.

Albin Lesky has noted, "Aeschylean tragedy shows faith in a sublime [splendid] and just [fair] world order, and is in fact inconceivable [unthinkable] without it. Man follows his difficult, often terrible path through guilt and suffering, but it is the path ordained [designed] by god which leads to knowledge of his laws. All comes from his will."

According to legend, Aeschylus was picked up by an eagle who thought he was a turtle. The eagle had been confused by Aeschylus's bald head. Aeschylus was killed when the eagle realized its mistake and dropped him.