Austrian psychiatrist Alfred Adler was credited with developing several important theories on the motivation of human behavior. He founded the school of individual psychology, a comprehensive "science of living" that focuses on the uniqueness of the individual and a person's relationships with society.

Alfred Adler was born on February 7, 1870, in a suburb of Vienna, Austria. He was the second of seven children of a Hungarianborn grain merchant. The Adlers were a musical family and Alfred was known for his singing voice. Although he was encouraged to pursue a career in opera, in his childhood he suffered some illnesses and the death of a younger brother. These experiences contributed greatly to his early decision to become a physician, or medical doctor. He attended classical secondary school and received a degree from the University of Vienna Medical School in 1895. Later, he married Raissa Epstein, a Russian student.

Adler's early career was marked by enthusiasm for social reform (improvement), often expressed in articles in socialist newspapers. (Socialism is a social system where the goods and services are owned by the government and distributed among the people.) His first professional publication was a social-medicine monograph (pamphlet) on the health of tailors.

In 1902 famed Austrian psychiatrist Sigmund Freud (1856–1939) invited Adler to join a small discussion group, which became the famous Vienna Psychoanalytic Society. Adler was an active member but did not consider himself a pupil or follower of Freud. He could not agree with Freud's basic assumption that gender (male or female) was the main factor in the development of an individual's personality. Whereas Freud tried to explain man in terms of his similarity to machines and animals, Adler sought to understand and influence man in terms of what makes man different from machines and animals, such as concepts and values. This humanistic view characterized all the ideas of his theory. In 1911 Adler resigned from Freud's circle to found his own school.

Adler worked three years of hospital service during World War I (1914–18) when European forces fought for world domination. In 1919 he organized a child-guidance 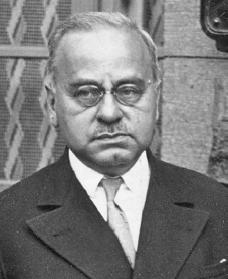 Alfred Adler.
Reproduced by permission of
Archive Photos, Inc.
clinic in Vienna, and also became a lecturer at the Pedagogical Institute. He was perhaps the first psychiatrist to apply mental hygiene (mental health) in the schools. Working with teachers in child-guidance clinics, he carried out his groundbreaking counseling before a small audience, dealing with the family and teacher as well as the child. This was probably the first "family therapy" and "community psychiatry" on record.

Beginning in 1926, Adler spent much time in the United States lecturing and teaching. When Adolf Hitler's (1889–1945) Nazi Party rose to power in Austria in 1932, Adler left with his wife and went to New York. On May 28, 1937, he died suddenly while on a lecture tour in Aberdeen, Scotland.

Adler left behind many theories and practices that very much influenced the world of psychiatry. Today these concepts are known as Adlerian psychology. His theories focused on the feelings of inferiority, and how each person tries to overcome such feelings by overcompensating (trying too hard to make up for what is lacking). Adler claimed that an individual's lifestyle becomes established by the age of four or five, and he stressed the importance of social forces, or the child's environment, on the development of behavior. He believed that each person is born with the ability to relate to other people and realize the importance of society as a whole.

As a therapist, Adler was a teacher who focused on a patient's mental health, not sickness. Adler encouraged self-improvement by pinpointing the error in patients' lives and correcting it. He thought of himself as an enabler, one who guides the patient through "self-determination," so that the patients themselves can make changes and improve their state. Adler was a pioneer in that he was one of the first psychiatrists to use therapy in social work, the education of children, and in the treatment of criminals.

Hoffman, Edward. The Drive for Self: Alfred Adler and the Founding of Individual Psychology. Reading, MA: Addison-Wesley, 1994.

HELLO WORLD I AM USING THIS SITE FOR A PSYCHOLOGY PROJECT AND IT IS VERY LONG!!