Bella Abzug worked for civil and women's rights as a lawyer and as a politician. Throughout her long political career, she used her sharp tongue and unusual style to advance the issues that were her deepest concern. As she wrote in her autobiography, "I'm going to help organize a new political coalition of the women, the minorities and the young people, along with the poor, the elderly, the workers, and the unemployed, which is going to turn this country upside down and inside out."

An early interest in women's rights

Bella Stavisky was born on July 24, 1920, in the Bronx, New York. She was the daughter of Emanuel and Esther Stavisky, Russian Jewish immigrants who owned a meat market. During her youth she worked in her father's store until it failed in the 1920s, and he turned to selling insurance. In 1930 her father died, leaving her mother to support the family with his insurance money and by taking jobs in local department stores.

Bella's interest in women's rights began at a young age. Her family was deeply religious. While attending synagogue (a place for Jewish worship of God) with her grandfather, she was offended that women were not treated the same as men. According to the rules of Orthodox Judaism (a branch of the Jewish faith that strictly follows customs and traditions), women were forced to sit in the back rows of the balcony in synagogues.

Bella Stavisky attended an all-female high school in the west Bronx, where she was elected president of her class. She then went 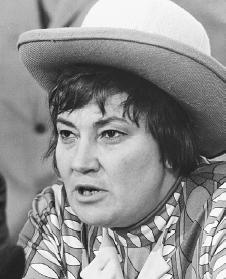 Bella Abzug.
Courtesy of the
Library of Congress
.
on to Hunter College, where she served as student-body president and graduated in 1942. She taught Jewish history and Hebrew on the weekends. She marched in protests against the harm being done to Jewish people in Europe and against British and American neutrality in the Spanish Civil War. (The war was a revolt led by the military against Spain's Republican government that lasted from 1936 to 1939). During World War II (1939–45) she was one of thousands of American women entering war production industries, working in a shipbuilding factory. In 1944 she married Maurice Abzug, a stockbroker and writer. The couple had two daughters.

Bella Abzug decided that she could do more to help people if she became a lawyer. She entered Columbia Law School, where she became editor of the Columbia Law Review. After graduating in 1947, she worked as a labor lawyer and represented civil rights workers. She became committed to helping poor people gain justice and a decent life in the days following World War II.

In the 1950s Abzug became deeply involved in the early civil rights movement. In 1950 she agreed to defend an African American man named Willie McGee. McGee was accused of raping a white woman with whom he had been having an affair, found guilty, and sentenced to death under the harsh laws in place in Mississippi during that time. Although she lost the case, Abzug succeeded in delaying the man's execution for two years by appealing the ruling twice to the Supreme Court.

In the late 1960s Abzug continued to do what she could to help ethnic minorities, women's groups, and the poor. During these years she became active in the Democratic Party. After the Chicago Democratic Convention in 1968 she joined with other like-minded Democrats to found the New Democratic Coalition. She also joined in the movement to ban nuclear testing, a movement that became more of an antiwar movement as the United States deepened its involvement in the Vietnam War (1955–75). In this war, the United States supported the anti-Communist government of South Vietnam in its fight against a takeover by the Communist government of North Vietnam.

In 1970, with the support of labor organizations and the Jewish population, Abzug was elected to the U.S. House of Representatives from New York City's Nineteenth District. She quickly gained national attention for her bold ideas and for the wide hats she wore within the halls of Congress. On her first day on the job she introduced a bill calling for American troops to be pulled out of Vietnam by July 4, 1971. Although the bill was defeated within a week, Abzug had made a name for herself as a politician with a tough style who was unafraid of her opponents.

While in office she coauthored the 1974 Freedom of Information Act (a law that gives people in America the right to access otherwise secret information from government agencies) and the 1974 Privacy Act (a law that gives U.S. citizens and permanent residents the right to access many government files that contain information about them). She was the first to call for the impeachment (a process in which a public official is put on trial in Congress with the Senate acting as the judge) of President Richard Nixon (1913–1994) for his involvement in criminal activity. She also cast one of the first votes for the Equal Rights Amendment, a proposed amendment to the Constitution that if passed would have guaranteed equality of rights to both men and women.

In 1972 New York City changed the way its congressional districts were set up, eliminating Abzug's district. She decided to run against the popular William Fitts Ryan (1922–1972) in the Twentieth District. She lost the primary, but Ryan died before the general election in November. As a result, Abzug became the Democratic candidate in the general election. She won and went on to serve in the House until 1976, when she gave up her seat to run for the Senate, a race she lost to Daniel Patrick Moynihan (1927–). She then ran in the Democratic mayoral primary in New York but was defeated by Edward Koch (1924–). Never one to give up, she told reporters not to assume that she was finished with politics.

Abzug continued to fight for peace and women's rights long after leaving office. President Jimmy Carter (1924–) appointed her as cochair, or joint leader, of the National Advisory Committee for Women. However, after the committee met with President Carter and pointed out that recent cuts in social services were having a negative effect on the nation's women, Abzug was dismissed from the committee. This led to the resignation of several other members, including the other cochair, and caused a massive public outcry against Carter.

Abzug devoted her energies to women's rights up to the final years of her life. As chair of New York City's Commission on the Status of Women, she directed a national campaign to increase the number of women in public office. Her presence at the United Nations 4th Women's Conference in Beijing, China, in 1991, attracted a great deal of attention. On March 31, 1998, after an operation on her heart, Abzug died in New York, bringing to an end a lifelong fight to improve the lives of women, minorities, and the poor.