Hank Aaron is major league baseball's leading home run hitter, with a career total of 755 home runs from 1954 to 1976. He also broke ground for the participation of African Americans in professional sports.

Henry Louis Aaron was born in Mobile, Alabama, on February 5, 1934, the third of Herbert and Estella Aaron's eight children. His father was a shipyard worker and tavern owner. Aaron took an early interest in sports. Although the family had little money and he took several jobs to try to help out, he spent a lot of time playing baseball at a neighborhood park. Lacking interest in school because he believed he would make it as a ballplayer, Aaron transferred out of a segregated (restricted to members of one race) high school in his junior year to attend the Allen Institute in Mobile, which had an organized baseball program.

After high school graduation, Aaron played on local amateur and semi-pro teams, such as the Pritchett Athletics and the Mobile Black Bears, where he began to make a name 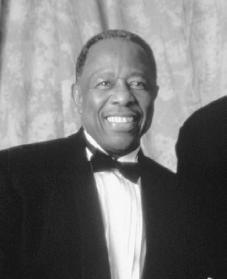 Hank Aaron.
Reproduced by permission of
AP/Wide World Photos
.
for himself. At this time Jackie Robinson (1919–1972) of the Brooklyn Dodgers was breaking the baseball color barrier by becoming the first African American player in the major leagues. At age seventeen, Aaron gained immediate success as a hard-hitting infielder. In 1951 the owner of the Indianapolis Clowns, part of the professional Negro American League, signed him as the Clowns' shortstop for the 1952 season.

Being almost entirely self-taught, Aaron batted cross handed in his early years, "because no one had told him not to," according to one of his biographers. Still, Aaron's sensational hitting with the Clowns prompted a Boston Braves scout to purchase his contract in 1952. Assigned to Eau Claire, Wisconsin, in the minor Northern League (where coaching corrected his batting style), Aaron batted .336 and won the league's rookie of the year award. The following year he was assigned to the Braves' Jacksonville, Florida team, in the South Atlantic (Sally) League. Even while enduring the taunting of fans and racial insults from fellow players in the segregated south, he went on to bat .362, with 22 homers and 125 runs batted in (RBIs). He was named the league's most valuable player in 1953.

During winter ball in Puerto Rico in 1953 and 1954 Aaron began playing positions in the outfield. In the spring of 1954 he trained with the major league Milwaukee Braves and won a starting position when the regular right fielder suffered an injury. Although Aaron was sidelined late in the season with a broken ankle, he batted .280 as a rookie that year. Over the next twenty-two seasons, this quiet, six-foot, right-handed All-Star established himself as one of the most durable and skilled hitters in major league history.

In fourteen of the seasons Aaron played for the Braves, he batted .300 or more. In fifteen seasons he hit 30 or more homers, scored 100 or more runs, and drove in 100 or more runs. In his long career Aaron led all major league players in RBIs with 2,297. He played in 3,298 games, which ranked him third among players of all time. Aaron twice led the National League in batting, and four times led the league in homers. His consistent hitting produced a career total of 3,771 hits, again ranking him third all-time. When Aaron recorded his three thousandth hit on May 7, 1970, he was the youngest player (at thirty-six) since Ty Cobb (1886–1961) to reach that milestone. Aaron played in twenty-four All-Star games, tying a record. His lifetime batting average was .305, and in two World Series he batted .364. He also held the record for hitting home runs in three straight National League playoff games, which he accomplished in 1969 against the New York Mets.

Although Aaron ranked among baseball's superstars, he received less publicity than other players. In part this was due to Aaron's quiet personality and the continuing prejudice against African American players in the majors. Moreover, playing with the Milwaukee Braves (who became the Atlanta Braves in 1966) denied Aaron the publicity received by major league players in cities like New York or Los Angeles. During Aaron's long career the Braves only won two National League pennants and one divisional title. The Braves won the World Series in 1957, the year Aaron's 44 homers helped him win his only Most Valuable Player award. The following year Milwaukee repeated as National League champions but lost the World Series.

Year after year Aaron ranked among the National League's leading home run hitters. It was not until 1970, however, that sportswriters and fans began noticing that Aaron was about to challenge Babe Ruth's (1895–1948) record total of 714 homers. By 1972 Aaron's assault on the all-time homer record was big news, and his $200,000 annual salary was the highest in the league. The following year Aaron hit 40 homers, falling one short of tying Ruth's mark. Early in the 1974 season Aaron hit the tying homer in Cincinnati, Ohio. Then, on the night of April 8, 1974, before a large crowd in Atlanta, Georgia, and with a national television audience looking on, Aaron hit his 715th homer off Dodgers pitcher Al Downing, breaking Ruth's record. It was the highlight of Aaron's career, although it was tempered by a growing number of death threats and racist letters that made Aaron fear for his family's safety.

After the 1974 season Aaron left the Braves and went to play for the Milwaukee Brewers until his retirement in 1976. At the time of his retirement as a player, the forty-two-year-old veteran had raised his all-time homer output to 755. When he left the Brewers he became a vice president and director of player development for the Braves, where he scouted new team prospects and oversaw the coaching of minor leaguers. He later went on to become a senior vice president for the Braves. Overall, his efforts contributed toward making the Braves one of the strongest teams in the National League. In 1982 Aaron was voted into the Baseball Hall of Fame at Cooperstown, New York, and in 1997 Hank Aaron Stadium in Mobile was dedicated to him.

Aaron received two honors in October 1999. Congress passed a resolution recognizing him as one of baseball's greatest players and praising his work with his Chasing the Dream Foundation, which helps children age nine through twelve pursue their dreams. Later that month, Aaron was named to major league baseball's All-Century Team, whose members were chosen by fans and a panel of baseball experts. In January 2002, Aaron was honored with one of the greatest tributes an athlete can receive: his picture appeared on a Wheaties cereal box.

Aaron, Hank, with Lonnie Wheeler. I Had a Hammer: The Hank Aaron Story. New York: HarperCollins, 1991.

Thank you for posting this article on Hank Aaron it really helped me on my black history month project i can't tank you enough!
2
Antonio Tejada

I would like to express my gratitude to Mr. Hank Aaron, for giving us baseball fans great moments during his career. He has been one of my biggest baseball heroes, and most of all, I remember his best attributes as a person: for being humble and always a gentleman. I gather that these traits come from a family which inspired these virtues in him; therefore, my gratitude is also to them, for making of him a great human being in baseball.

Hank, thanks again for being a part of our lives.

Hank was my baseballhall idle since 1954 when bobby Thompson broke his ankle and hank took over in right field. Hank was not only greatest hitter but a great person. Go hank!
4
Yeet

Thanks so much this really helped with my Black History Month project. I also read the book I Had A Hammer: The Hank Aaron Story as a requirement and it was actually really interesting and I genuinely don't like sports, so I guess thanks to my teacher and your website for saving my grade.